The Stealth Competitor – How is the Game Board Changing?

Let’s try to answer this question by process of elimination by looking first at what is different about them:

The list could go on ad infinitum. For example, another one is they have different CEOs. However, these different companies have, or had at one point, CEOs who had one trait in common. And that trait was strategic supremacy. In other words, their goal was not to have a strategy that allowed their companies to compete “adequately” but rather a strategy that aimed at supremacy over their competitors.

Supremacy over your competitors?

What an arrogant position to aspire too. Whatever one my think about the role of competition, the ultimate measure of a successful strategy is not that it allows you to compete “adequately”, which is the school of management “best practices” strategy “gurus” have been preaching for the last thirty years, but rather to make competitors irrelevant.

In fact, our view is that if you are obsessed with your competitors, it is probably because you have a me-too strategy that is not working and should be due for a re-think. Winning companies have a strategy that is distinctive and sets them apart from their competitors. Their view of competitors it not to look sideways to see who is ahead but rather, to look periodically back, to ensure that the gap is getting larger and larger.

How did these companies reach this elite position of supremacy?

The answer is by practicing a concept of strategy that does not attempt to imitate their competitor but rather, one that changes the rules of the game.”

Imitation may be the best form of flattery but it is the worst form of strategy. You do not distance yourself from your competitors by cloning their strategy but rather by crafting a strategy that changes the rules of the game to the extent it allows you to manage your competitor’s business as well as your own. And that is exactly what each of these above mentioned CEOs accomplished.

The concept of changing the rules of the game has withstood the test of time with many of my clients and has allowed them to achieve extraordinary improvements in financial performance. However, in view of a set of unique changes happening in the world, my view now is the entire process and concepts of strategy formulation and implementation require more strategic thinking.

Up until now, the concept of changing the rules of the game assumed that that game board upon which competition occurred, was static.

For example, the “game” of strategy can be compared to the game of chess. In chess, the game is played on a board that imposes similar rules on both players. Pawns, rooks, queens, knights, and kings can only move according to a range of preset rules. As a result, both players have a limited number of strategies available to them to win the game and attain supremacy over their opponent. The same has been true in business.

Until a few years ago, each industry had a “game board” with a predetermined set of rules that were imposed on all competitors in that industry. As such, a competitor’s search for a “distinctive strategy” has been confined within the constraints of the “rules” of that industry.

In the last few years, however, a number of “once in century” changes such as biotechnology and the internet, are not only changing the rules of the game they are changing the game board itself! In view of these changes in the fundamental structure of these industries, my view is that CEOs will not only need to conceive a strategy that changes the rules of the game but conceive a strategy that will change the nature of the game itself and then achieve strategic supremacy by setting the rules for any competitor who wishes to play the game.

If you would like to discuss how to be a stealth competitor and change the game in your industry, please call me at 941-373- 6520 or contact me at mark@marklthompson.com 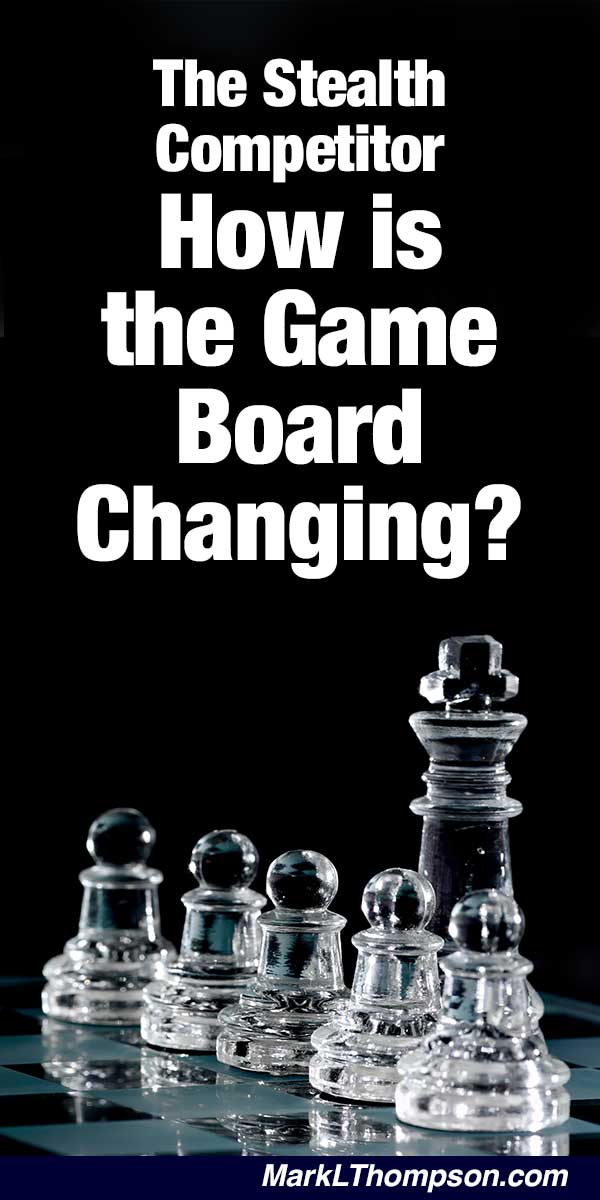 About the Author: Mark L. Thompson